In an effort to acquaint you with the fine folks who provide you with a steady stream of City Roots' tasty (and gorgeous) local product week-to-week, we present our (new!) Staff Spotlight Series! Follow along for series installments. First up: Brinton Fox, City Roots' Cut Flowers Manager. 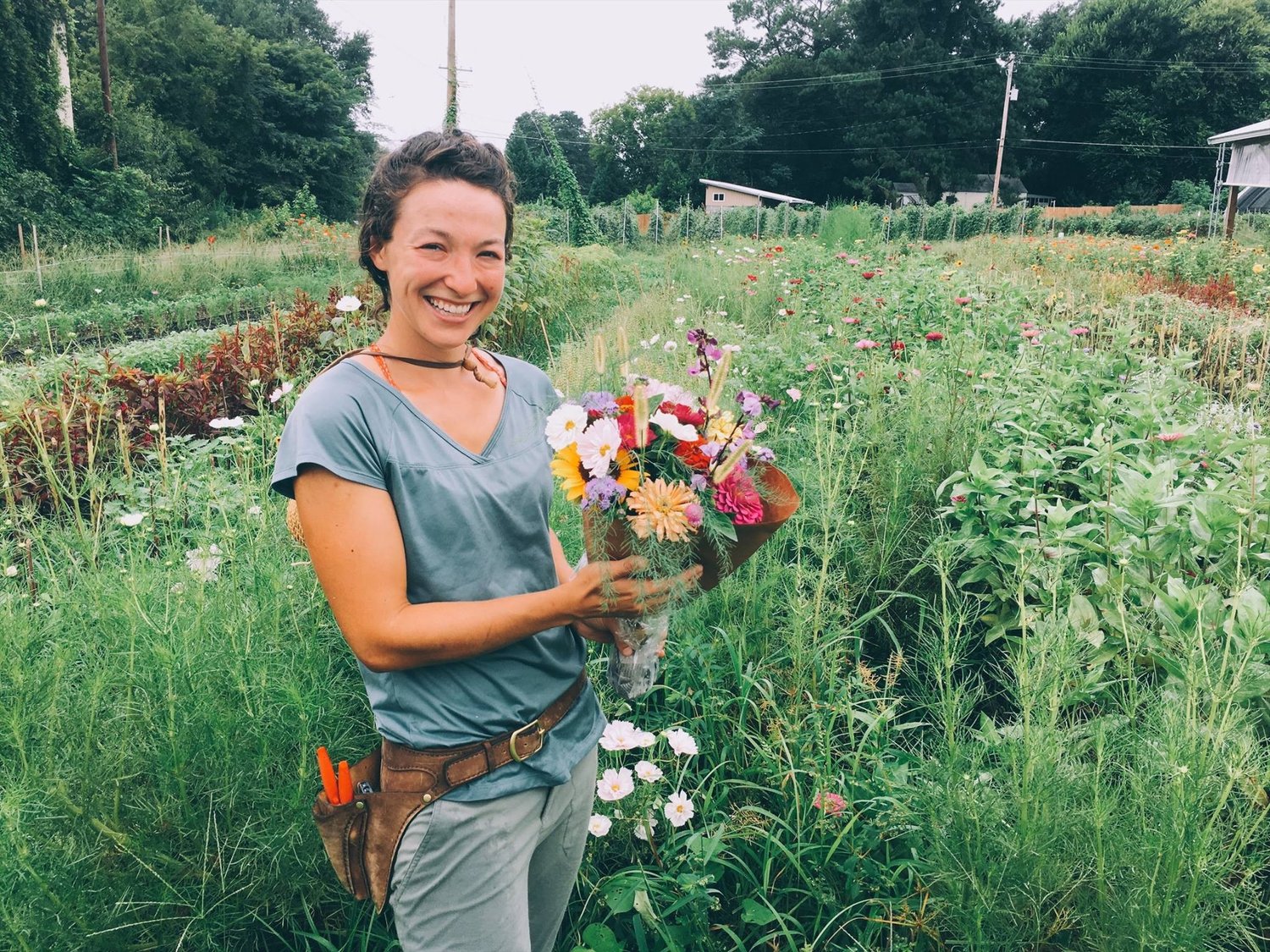 Small scale farming has always been a part of Brinton's life. Her mother ran a small, organic herb farm when she was a child in Chapin, SC, and her favorite thing to do as a kid was planting seeds in the greenhouses and harvesting basil. Brinton went to college at Clemson University with the aspiration of going to law school, but soon found herself working on the Student Organic Farm. She immediately fell in love with being back in agriculture and has never looked back! Since graduating from Clemson, Brinton worked on organic vegetable and flower farms in the mountains of NC and in the deep red clay of southern Georgia. She returned to the Midlands to help with starting a Farm to School program for the school district she grew up in. Now, at her new farming home, City Roots, she is able to combine aspects of her previous farming and education endeavors in her role as Cut Flowers Manager.

What Brinton does at City Roots:
Brinton manages all aspects of the cut-flower production at City Roots, from seed to bouquet. Starting with a comprehensive flower plan--which she follows through the year--she plants, cultivates and harvests, all by hand. After each harvest, she creates beautiful and seasonal bouquets for our farmers markets, events and Flower CSA. In addition to her cut-flower role, she helps with educational programming. Second graders from a local school planted sunflower seedlings with Brinton, which grew mighty and beautifully over the summer! Brinton also coordinates the farm's weekly Thursday Farmers Market.

City Roots launched its first Flower CSA this year, which was one of Brinton's favorite things about the 2017 season. Along with harvesting and arranging the bouquets for the Soda City Farmers Market, The Augusta Market and the City Roots Farmers Market, she sells wholesale flowers to florists and the farm's event partner, F2T Productions, for harvest dinners and events.

Brinton says, "Concentrating on the production of flowers has opened my eyes to a better understanding of a farm’s ecosystem as a whole. Crop planning and succession planting is vital in order to have a continuous harvest from our flowers, especially in the heat of South Carolina summers. All of our flowers are started from seeds or bulbs, and are sold as fresh as possible, which ensures a better product and vase life."